I finished my doctorate last spring and have kept it on the down-low regarding advertising that fact. While I occasionally use the fact that I´ve got a Ph.D. to poke fun at myself when I mess up in front of students or use my powers of deductive reasoning to make very obvious statements, I do not see the point in “celebrating” this academic accomplishment. I´ve had a few returning students come up to me and ask if I´ve finished my Ph.D. yet which is followed by the obvious question: so can I call you “Doctor Scully”?. My reply to this is usually as follows:

That said, when I finish my next doctorate, I wouldn’t mind being called “doctor-doctor” on account of how ridiculous it sounds.

I´ve been admonished my friends, family, and co-workers for my constant underplaying of this ‘accomplishment’ (this has actually been a recurring theme throughout my life). And I get it! Well, sort of. I suppose some people are defensive and want to feel like their own academic accomplishments matter and mean something or they want to see people take credit for the hard work and so on and so forth. To each their own, I guess.

In my mind, having a doctorate means that I know stuff and have learned how to do stuff good but those things are not exclusive to Ph.D. holders. I´ve met dozens of highly competent and skilled people that are dedicated professionals that lack ‘credentials’. I´ve learned many of the skills vital to finish my Ph.D. from people that only have associates degrees or bachelor’s degrees. If it wasn´t for people taking the time to teach me real skills (like troubleshooting problems or not letting bureaucratic bullshit get to so you don’t have a brain aneurysm), I probably wouldn’t have made it through university let alone managed to become a bench scientist. I suppose the reality of the situation is, I was already a practicing scientist responsible for supervising the research work of students before having a Ph.D. so I didn’t really experience much of a bump in my abilities just by virtue of completing a Ph.D. so what´s the big deal?

I think my attitude on the subject goes back to how I was brought up. My father had a Ph.D. and he would never allow people to call him ‘Dr. Scully’. I suppose that makes sense given his profession (he was a clinical psychologist working with young kids). Why build barriers between you and the people that you´re trying to help? That just creates an unnecessary hurdle that you have to unpack later; that´s counterproductive A.F. especially when you are charging by the hour for your psychological services! He spoke poorly of his work colleagues that pulled the ‘doctor card’ when introducing themselves and I totally get that.

I think another critical element in this little attitude of mine was my maternal grandfather; he was a highly skilled professional that was always curious and pushing himself to learn new things. He could pick up a new interest and just run with it. He did not complete any formal schooling beyond high school (he got drafted while he was in college because he was a mediocre student) and that didn’t stop him from mastering new skills throughout his entire life and his careers.

When I was in university (the first time), I took a course in analytical chemistry. The guy teaching the course was only a few years older than most of us and he told us to call him by his first name. It was the early 2000s and a lot of the up-and-coming academics were much more chill about their credentials than the old timers. I swung by his office one day to ask him a question about something or other. He was chatting with an older-looking person but he flagged me in and answered my question. I said, “thanks Dan, I appreciate it” and turned to walk away when the old fossil stands up and stops me with a firm, “HEY!” and proceeds to put me in my place. “You address him as DOCTOR or PROFESSOR!”. I was horrified and had no idea what was happening. I was just a 19 or 20 year old kid and I had seldom been dressed down by an authority figure (it turns out that he was the department chairperson and had a bit of a think for old-school formalities).

To top it off, I moved to Iceland when I was in my early 20s. No one uses formal titles like ‘mister’ or ‘doctor’ or whatever. Everyone is on a first name basis here regardless of social standing or professional status. It took some getting used to at first but ultimately I think it creates a more open and friendly atmosphere so we can get to the business of discussion ideas rather than wasting breathe on such nonsense. I´ve read stories about how overly formal societies (such as Japan) leads to situations where people are afraid to point out the errors of their superiors which can have catastrophic consequences.

An article regarding this year’s Microbial Ecology summer course.

The Icelandic Metrological Office predicted an evening relatively free of cloud cover for the evening of September 12th so my wife and I jumped into the car and drive east hoping to find a clear vantage point to catch a glimpse of the lava field at Holuhraun. Additionally, a double CME had hit so at the very least there was a pretty good geomagnetic storm brewing overhead. With a good shot at catching a glimpse of the fissure eruption at Holuhraun and a near perfect shot at catching a good show of the Northern Lights, what was there to lose?

We drove around on a back road to Mývatn just off of Route 483 and found some truly stellar displays of the Northern Lights which had been visible as twilight fell.

Not finding any evidence of the eruption being visible, we turned around and went south. Driving down route 483 towards the ominously red sky, we eventually landed at a farm in Svartárkot where we were greeted with a road closed sign.

Not wanting to piss off the cops and risk getting arrested, we turned around and took a few photos on the way back. 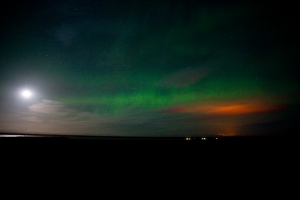 The research group has been blessed with a sudden burst of visiting Erasmus students and a visiting professor from Germany! All in all, we’ve got a total of six (6!) Erasmus students working on a variety of projects involving thermophiles. With any luck we’ll be able to clear the back log of environmental enrichments from last summer’s bioprospecting while kicking the ball down the road on a number of research projects.

Hopefully these guys and gals will have a blast while playing with these bugs.

Prospecting for psychrophiles in northern Iceland (2013)